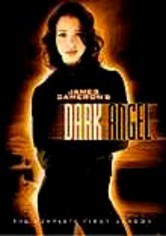 2000 TV-PG 6 discs
In post-apocalyptic America, Max (Jessica Alba) is a genetically enhanced human who escaped her military handlers. Now she roams the Pacific Northwest searching for others like her: those who are stronger, faster, have X-ray vision and are haunted by nightmares. But can she continue to elude those desperate to reclaim her? This series was created for television by acclaimed film director James Cameron.

Parents need to know that this dark sci-fi series centers on a genetically engineered superhuman who fights crime, but is very violent in the process. Bred as a superior fighting machine, the main character grew up without a strong moral compass and now attempts to live a "good" life. However, as she fights crime she also participates in it -- stealing, fighting, shooting guns, and bribing authority figures. Frequent flashbacks to Max's childhood in a military compound add a disturbing element that might upset sensitive viewers. Also, expect some strong language ("ass," "bitch").

While there is no overt sexual behavior, sexual topics do come up including prostitution and insinuations of sexual abuse.

Characters, including the genetically engineered children, are shot at, tasered, beaten, and chased. Most episodes include hand to hand combat, guns, and tense chases.

"Bitch," "hell," and "ass" are used in most episodes. Characters also use a futuristic slang.

Max and Logan work together to attempt to correct injustices in an immoral, post-apocalyptic world. However, since all authority figures are corrupt, the duo engages in vigilante justice which often results in death. Max and Logan's bond, loyalty, and sense of morality tempers this violent message.

Characters drink at bars, rarely to excess. There is discussion of drug addiction in the context of Max's amino acid pills, which she must use to avoid seizures.