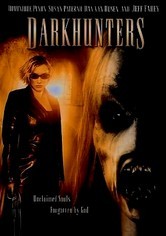 2004 NR 1h 23m DVD
Walking the Earth as an undead spirit has Charlie Jackson (Dominique Pinon) in a quandary. Unable to interact with his family, Charlie feels he's been forsaken by God. Now, his ultimate goal is to get to heaven as soon as possible -- and that's easier said than done. The battle between good and evil for Charlie's soul has begun, and salvation might only come via Carol Miller (Susan Paterno), a dark hunter who brings lost souls back to death.