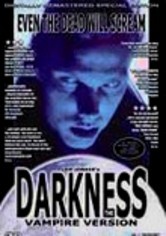 1993 NR 1h 30m DVD
When an army of vampires takes over a small town, blood flows (and flows and flows) in the director's cut of this classic gore flick from the underground horror wave of the early 1990s. Appropriately enough, the makers of the film helped finance the production by selling their blood at the local plasma bank. The two-disc set also includes "Vampire Bootcamp," a documentary short featuring cast and crew interviews.