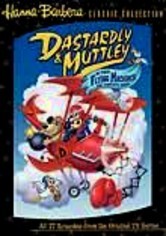 1969 NR 3 discs
Catch all 17 episodes of this hilarious animated series from Hanna Barbera featuring the wacky Dick Dastardly and his partners in crime -- snickering Muttley, inventive Klunk and nervous Zilly. Aboard his magnificently silly airplane, which he christened the Vulture Squadron, Dastardly sets out to stop the evil Yankee Doodle Pigeon from wreaking havoc, but winds up making a colossal mess of his own.

Parents need to know that this hilarious animated classic will make you want to root for the villain. But although it's very well executed, the series has its fair share of violence, weapon use, and stereotypes (the latter thanks mostly to its "classic" status).

Dastardly and Muttley frequently run from bullets and explosives, but there's no bloodshed.

Violence is glamorized, and some characters are presented in a stereotypical fashion.