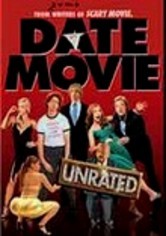 2006 UR 1h 25m DVD
Skewering the gooey romantic comedy formula, this over-the-top spoof from the minds behind the Scary Movie franchise stars Alyson Hannigan (American Pie) as a young woman in love with being in love. But after meeting the man of her dreams -- a dashing Brit (Adam Campbell) -- the hopeless romantic runs across every obstacle in the book, from disapproving parents to scheming best friends determined to put the kibosh on the couple.

Parents need to know that this film is comprised of relentless obnoxiousness. Body and bodily function jokes include gastrointestinal distress, coughing up hairballs, moles, and pimples (one popped to release lots of goo); a chicken wing stuck between a girl's teeth, body makeover in the form of "Pimp My Ride" (hair removal, liposuction, a sander for yellow toenails, a drill taken to girl's body); cat using the toilet with much farting and grunting; urn with grandma's ashes also includes skeleton (which cat proceeds to hump, sexually); and cats are tossed about in an old woman's apartment. Sex and "date" jokes include horrified reactions to obese girl (her breasts turn around on her body as the soundtrack plays "Milkshake," which includes sexual references); sloppy and extensive kissing; arranged marriages; boy's last name (Fonckyerdoder, reference to "Focker"); couple exchanges lyrics of 50 Cent's "Candy Shop" (sexual references); allusion to "knocked up"; uses of "ho" and "bitch"; a cat smokes a cigarette, apparently after sex with old woman.

Women wear tight outfits and show cleavage; references to gay men (Julia thinks one is interested in her, Grant has an ex-boyfriend), diner features neon sign that shows man tongue-kissing a sheep; "date doctor" has OB-GYN on his office door; kissing is repeatedly excessive, involving licking and slobbering; Jello (joke on J-Lo) has huge behind; Grant appears to fake an orgasm in restaurant (copying Meg Ryan in When Harry Met Sally..., and also rubbing his nipples); Julia emulates "Girls Gone Wild" video, removing her bikini top in a hot tub (covered with a superimposed bar); Grant and Julia kiss passionately and pull of clothes, then scene cuts to post-sex conversation in bed; Andi mimics Paris Hilton and others (wearing bikini, wet, gyrating, rubbing hamburgers and other foods on her body).

Comic violence, but gross and sometimes brutal (Grant shoots and kills bachelorettes on Extreme Bachelor; kids on a date express their "love" by beating up a homeless man).

Tedious, unimaginative gags about sex and dating; though the daters find true love, it's hard to care because they're only one-dimensional bases for jokes.

Cat smokes cigarette, references to smoking in a diary.