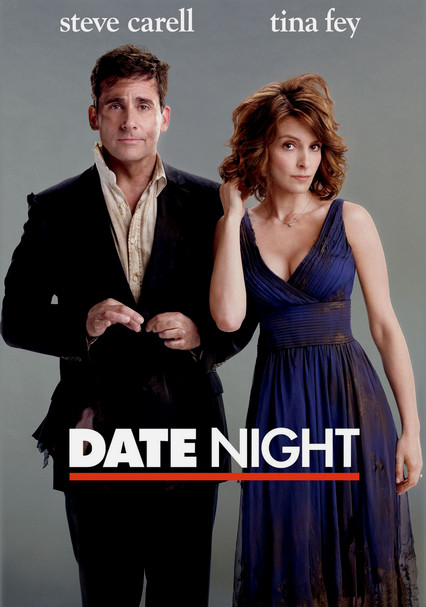 2010 PG-13 1h 42m Blu-ray / DVD
Who knew simple dinner reservations under a different name could turn one New Jersey couple's date night so terribly upside-down? Claire (Tina Fey) and Phil (Steve Carell) Foster leave their kids with the sitter (Leighton Meester) and head out for a night on the town -- as the Tripplehorns. Shawn Levy (Just Married, Night at the Museum) directs this action-comedy; Mark Wahlberg and James Franco co-star.

Parents need to know that this farcical comedy, filled with the kind of pratfalls, comic car chases, and silly humor of Tina Fey and Steve Carell that appeal to teens, is geared more toward adults. It contains sexual innuendo and coarse language throughout, plus mature themes related to married life, and episodes of violence and gunplay -- all played for humor. One long sequence takes place in a strip club and includes near-nude women, suggestive dancing, and the threat of violent behavior. There are multiple discussions of menstruation, infidelity, and sexual misbehavior. Strong language abounds ("asshole," "s--t," "penis," "whore" and one use of "f--k"). The leading characters are held at gunpoint and shot at many times, however, it's all comedic action and no one is injured or killed. One comic car chase results in dozens of crashes, shattered windows, a character hanging onto carhood, and a main character ending up in a river, unharmed.

A very long sequence takes place in a strip club with women in various states of undress (no actual nudity), sexual posing, dancing, and cavorting with customers. A pole dance scene is played strictly for laughs. There is some kissing and embracing between couples, but no overt sexual activity. Lots of sexual innuendo throughout, including repeated scenes with a shirtless Mark Wahlberg, and discussion about the possibility of group sex. The final shot finds a married couple, fully clothed, embracing and rolling together in the grass.

Lots of action with characters held at gunpoint, heavy gunfire, and dangerous gangsters. The hero and heroine are constantly on the run, captured and menaced by two or more very bad guys. A lengthy car chase results in huge numbers of car crashes. All of the action, however, is intended to be comedic with no real threat of injury or death.

Language is coarse throughout, including one use of "f--k," and several uses of: "s--t," "vagina," dumbass," "pissed," and "asshole." Repeated use of "penis," "bitch," "whore," "whacked off," etc. Many uses of "God" and "Goddamn" as exclamations. There are sexual innuendos from beginning to end, all intended as humor. Several references to menstruation.

The ultimate message is one that reinforces the positive aspects of a traditional marriage and the monogamous relationship, despite their many challenges, including monotony, irksome behavior, and even temptation. The husband says he does things he doesn't like because that's part of marriage and it's important to him to make his wife happy. Also, he asks his wife to trust more of the day-to-day household management to him and release some of her resentments. Through the ordeal, they are able to see one another in a new light and rekindle their affection.

Kindle has a major product placement in one short scene. In another scene a bus stop ad features Dentyne gum prominently. Some fancy cars. Brief references to Radio Shack and Diet Sprite.

Wine is served with meals and in one scene the couple gets fairly tipsy and goofy. There are scenes in both a cocktail bar and a strip club which show many people drinking. One mention of the drug "nitrous" referring to a girl nicknamed "Whip-It."