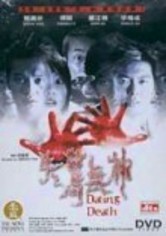 2004 NR 1h 27m DVD
In this thriller, a group of friends -- Sophie (Theresa Fu), Lily (Stephy Tang) and five guys -- vacation at an island villa. All the men -- including Ken, who's seeing Lily -- reveal that they find Sophie most attractive. In the morning, Ken is dead. A year later, the friends get post-mortem invitations from Ken to return to the scene of the crime. Soon enough, another murder takes place, and the remaining friends are trapped on the island.