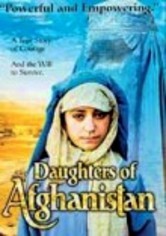 2004 NR 0h 58m DVD
Life in post-Taliban Afghanistan remains a struggle for many of the country's female residents, five of whom are profiled here by journalist Sally Armstrong in an attempt to track the progress of Afghan women. Among the women Armstrong introduces are a doctor, a school principal, a housewife who's been made a virtual sex slave to her husband, a mother of five and a girl whose childhood was lost to the war.