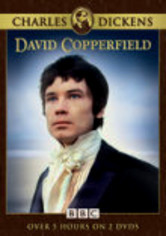 1974 NR 2 discs
David Yelland steps into the title role in this epic miniseries produced by the BBC, based on Charles Dickens's classic tale about a young orphan's search for home and identity. Copperfield's journey begins when, as a lad, he wends his way through the hellish public school years, buffeted from one family to the next, and later, gains a foothold on adulthood as a writer. Martin Jarvis co-stars as Uriah Heep.