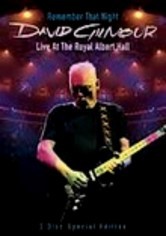 2006 NR 2 discs
English rocker David Gilmour, well-known for his vocal and guitar work with Pink Floyd, performs a blistering set featuring his third solo album "On an Island" in its entirety as well as Pink Floyd classics such as "Fat Old Sun" and "Echoes." Joining Gilmour on stage are rock greats David Crosby and Graham Nash on "Shine on You Crazy Diamond" and musical innovator David Bowie on "Comfortably Numb."