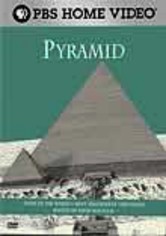 1988 NR 1h 0m DVD
How in the world did the ancient Egyptians manage to shape 2 million blocks of heavy stone into the Great Pyramid at Giza given the lack of modern machinery available to them? In this installment of his televised series exploring technology and architecture, noted author David Macaulay examines the famed structures, as well as the history, mythology and religions of the Egyptians, and uncovers buried treasure in the sacred Valley of the Kings.