Day of the Ax 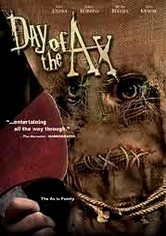 Day of the Ax

2005 NR 1h 15m DVD
After being institutionalized for eight years for killing his mom, J.R. Song escapes and goes on a killing and raping spree. Then he disappears. Now, a series of ax murders have everyone wondering who's to blame. Has J.R. returned? Or is there another killer loose in the community? Amy Liszka, Janet Robbins and Peter Blessel co-star in this grisly thriller from director Ryan Cavalline.