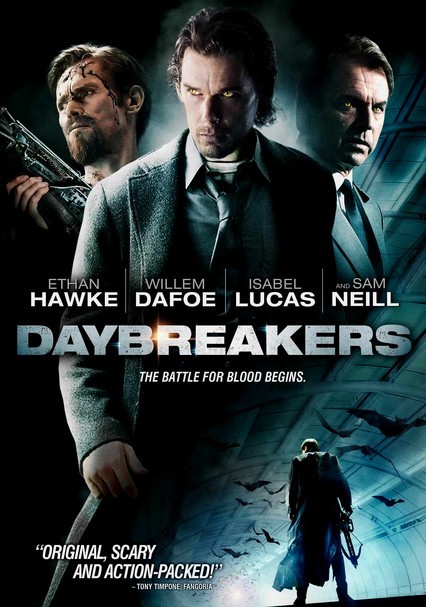 2009 R 1h 38m Blu-ray / DVD
In this sinister thriller, Earth faces a vicious plague that's transforming everyone into vampires and draining the world of an increasingly precious resource: blood. As the human race count nears zero, could science hold the key to a solution?

Parents need to know that Daybreakers is an action-oriented vampire movie that's heavy on blood, gore, and violence -- in other words, it's no angsty, teen-friendly Twilight. Be ready for disturbing images that depict hungry vampires mutating into horrible creatures, as well as some characters enduring excruciating pain as a way to be "reborn." There's also plenty of strong language (including "f--k" and "s--t") and smoking. The movie has a slightly veiled message about the excessive consumption of natural resources, and the main character actually has admirable traits -- including honor, decency, and selflessness -- but some of that gets lost amid the over-the-top, comic book-like tone and gallons of spilled (and splattered) blood.

The heroine runs around braless and in a tank top. But the story's vampire troubles leave very little time for sex, kissing, or romance.

Tons of fantasy violence -- it's less a horror movie than an action movie filled with fighting, gore, and some disturbing imagery (i.e. humans hanging from machines that harvest blood). The heroes wield crossbows and knives, while the bad guys generally fire high-powered dart guns (also a Taser). There Gallons of blood are shed, including guts spattering on walls, beheadings, limb-tearing, and an exploding head. In one subplot, starving vampires who are deprived of human blood begin to mutate; viewers see disturbing photos of this process.

Several uses of "f--k"" (including "motherf--ker") and plenty of uses of "s--t." Also words/phrases like "dammit," "hurts like hell," "goddamn," and "life's a bitch and then you don't die." One character uses colorful euphemisms like "it's as safe as barebacking a $5 whore."

While the movie doesn't have strongly positive take-aways, its story is a metaphor for humans depleting natural resources with no concern for the future. The bad guys are shown trying to earn a profit from this crisis, while the heroes continually fight for the betterment of mankind and vampirekind. Human and vampire enemies must learn to trust one another.

Characters smoke a lot of cigarettes.