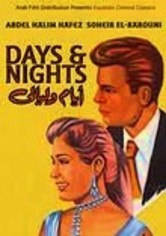 1955 NR 1h 42m DVD
Singing sensation Abdel Halim Hafez stars as a love-struck suitor who falls hard for the beautiful Iman but finds his pursuit sidelined in this classic Egyptian musical romance. The courtship hits a snag when the swain steps in to take the blame for an accident caused by his brother and alienates Iman in the process. Highlights of the film include a romantic serenade from Hafez, who's been dubbed "the Brown Nightingale."