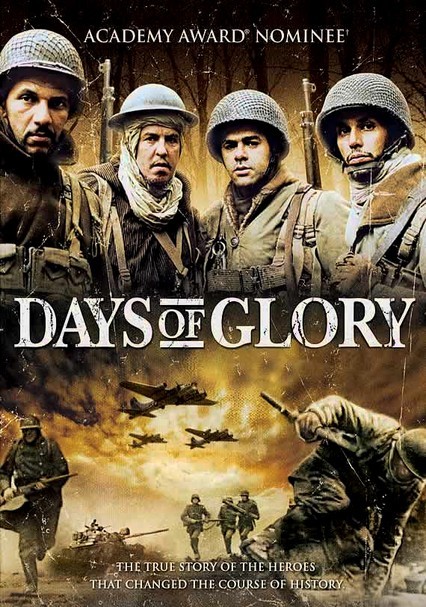 Parents need to know that this subtitled French World War II drama deals with mature subject matter and has combat action scenes that are especially brutal (dismembered, bloody, burning, and exploding bodies). The focus on the French Caucasian troops' racism toward their Muslim fellows leads to tension and fights. A Muslim soldier and a white woman embrace and kiss (and she appears in a slip). Cigarette smoking, some drinking, and plenty of subtitled swearing and other language ("f--k," "s--t," and some arguments involving epithets like "wog").

A soldier and a woman kiss and embrace briefly.

Frequent, harsh battlefield action, with explosions, burning, and bloody bullet wounds; a frustrated soldier stabs at a body with his bayonet (his fellows accuse him of savagery); fights between soldiers feature punching, pushing, and one assault with a knife; dead bodies and acts of violence "punctuate" characters' emotional trajectories.

The French Caucasians are overtly racist; the Algerians/Muslims resist in various ways, sometimes with violence.

Frequent cigarette smoking (it's the 1940s); some drinking.