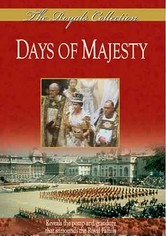 1993 NR 1h 43m DVD
From Queen Elizabeth II's coronation in 1953 to The Ceremony of the Keys at the famed Tower of London, this fascinating documentary captures the British monarchy's grandeur and history. The pomp and pageantry of the royal family and Britain's oldest celebrations are covered in depth, including Trooping the Colour and behind-the-scenes footage of painstaking preparations for a 41-gun salute at Hyde Park