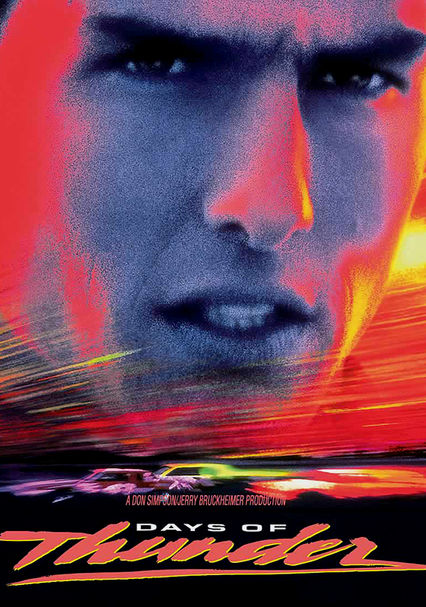 1990 PG-13 1h 47m Blu-ray / DVD
Talented but unproven stock car driver Cole Trickle turns heads on the track. The young hotshot develops a rivalry with a fellow racer that leads to an accident. But with the help of his doctor, Cole just might overcome his injuries -- and his fears.

Parents need to know that Days of Thunder is a 1990 movie starring Tom Cruise as a cocky but untested stock car racer who dreams of winning the Daytona 500. There is some sexism on display when a stripper is hired to dress like a police officer and grab Cruise's character's crotch while taking off her top and making sexually suggestive comments; later, he thinks the doctor taking care of him is also a stripper and moves her hand to his crotch, much to the delight and hilarity of the men gathered around him. There is some profanity, including "f--k" and "s--t," and, unsurprisingly since this is centered on stock car racing, lots of images of company products and brands. Overall, it's a formulaic blockbuster movie from the early 1990s. However, it's worth noting that the movie is prescient -- intentional or not -- in discussing and showing the effects of concussions on athletes, a topic that has been increasingly scrutinized in recent years.

During a prank involving state troopers, a female police officer places her hand on the crotch of one of the lead characters, then proceeds to take her hair down and remove her top as she makes suggestive sexual comments. Later, this same character is in the hospital, and when the doctor, an attractive woman, begins talking to him, he assumes she is also a stripper and forces her hand onto his crotch as his friends in the room laugh.

Car crashes during stock car races, one resulting in injuries and hospitalization for two of the main characters. Two stock car race rivals rent cars and race each other on a city street, resulting in serious damages to both cars.

Resilience and determination are shown to be positive values.