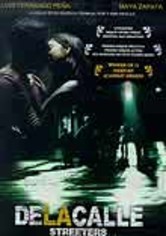 2001 NR 1h 24m DVD
Growing up in rough-and-tumble Mexico City, Rufino (Luis Fernando Pena) learns to fend for himself early when his father disappears and his adoptive mother no longer has time for him. He soon gets mixed up with a tough gang of criminals and spends most of his time doing drugs. In an effort to make a better life for himself and his girlfriend, Xochitl (Maya Zapata), Rufino steals a bag of cocaine from his mother's boyfriend and tries to sell it.