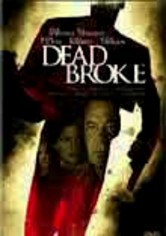 1998 R 1h 38m DVD
When an anonymous witness calls in a murder that supposedly took place outside a Brooklyn debt collection agency, an intrepid detective shows up at the scene to investigate. But with the body nowhere to be found, his only hope is to start making his way through the company's client roster, questioning a wide array of suspects along the way. John Glover, Paul Sorvino and Jill Hennessy co-star in this hard-boiled -- yet comic -- whodunit.