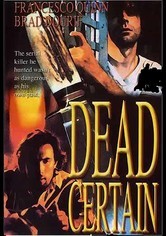 1990 NR 1h 33m DVD
Detective John Reed (Francesco Quinn) is obsessed with capturing a serial killer with a penchant for creatively murdering young women. Reluctantly, Reed must join forces with convicted murderer John Barnes (Brad Dourif), the very person he suspects is the culprit. Barnes has clues to the killer's whereabouts but will he be willing to share his information with Reed -- the very person who put him in jail in the first place?