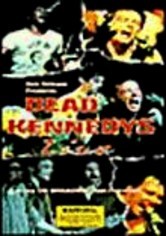 1984 NR 1h 3m DVD
A few months before punk iconoclast band the Dead Kennedys broke up, they played their final gig at an avant-garde, San Francisco venue that was closing -- on Broadway, where this show was recorded in 1984. One of only two filmed Dead Kennedys concerts, the performance provides a rare chance to watch one of America's most formidable punk groups as they play smashing renditions of their classics such as "Hop with the Jet Set" and "Riot."