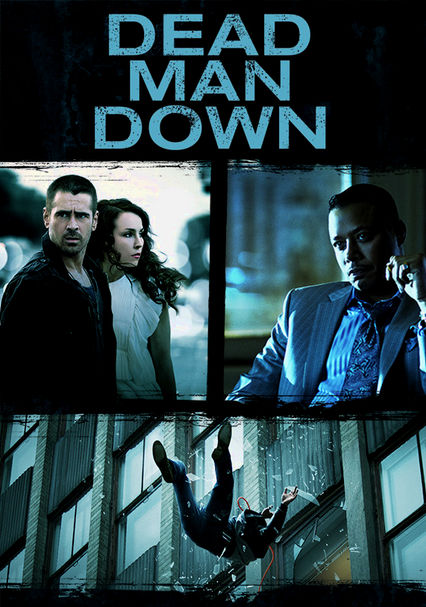 2013 R 1h 57m Blu-ray / DVD
This taut crime thriller stars Colin Farrell as a brutal gang enforcer who falls for a woman bent on exacting revenge on his boss. Via seduction and blackmail, the woman persuades the gangster to help her achieve a bloody payback.

Parents need to know that Dead Man Down is a revenge-themed thriller from the director and star of the original Swedish The Girl with the Dragon Tattoo. It's not nearly as intense as that movie, but it does have plenty of violence, language, and sexuality. There are close-range shootings and several gunfights, with dead bodies and some blood, and a character is briefly tortured (tied up and covered with rats). A minor character has sex with a prostitute, though no graphic nudity is actually shown. The male and female leads kiss on two occasions. "F--k" is used several times and "s--t" a few times. All of the main characters smoke cigarettes, and an illegal cocaine facility, with piles of cocaine, is briefly shown. Though the main character experiences some redemption, he's still driven by vengeance, and there are no repercussions for the killings he commits in the name of revenge.

A minor character is shown having sex with a prostitute (she demands her money afterward). Very little nudity is shown: The woman wears her bra, and though she doesn't have underwear on, she covers herself. The two main characters kiss on two occasions.

Two huge gunfights with shooting and dead bodies, though not much blood is shown outside of minor injuries. A frozen corpse is shown. Characters are shot in the head and shot at close range. Other characters are shot by long-range rifle. A character is hanged with a rope. A character is briefly tortured -- tied up and covered with hungry rats. A bloody ear is shown after an operation. A woman is briefly held hostage during a shootout. A car crashes into a building.

"F--k" is used several times, in various permutations, throughout the movie. "S--t" is also used a few times. "Bitch" is used once.

The movie's main theme is revenge, and although there are a few hints of redemption at the end, it sticks close to that motif, with the main characters killing without repercussions.

Tupperware is mentioned a few times. A delivery service that resembles FedEx is used but is fictionalized for the movie.

One scene takes place in an illegal drug facility, with piles of cocaine shown. Almost all of the main characters smoke cigarettes at least once. The main female character drinks a beer in a restaurant.