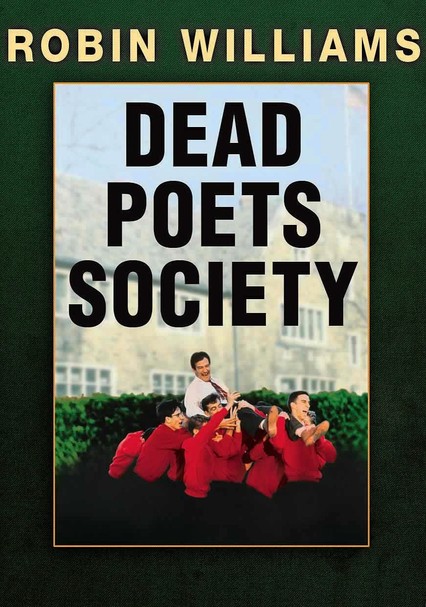 1989 PG 2h 9m Blu-ray / DVD
Oscar nominee Robin Williams stars as John Keating, an unconventional teacher who inspires students through poetry. When the school fires him, his devastated students rally behind him, mindful of the ways he has changed their lives.

Parents need to know that Dead Poets Society has very uplifting messages especially for teens about seizing the day and embracing poetry as a way toward thinking for yourself and positive self-expression. But it also deals with the suicide of one of the main characters (the gunshot isn't shown, but the parents are shown holding their son afterward, hysterical). Everyone smokes a lot (mostly a reflection of the time mixed with teen rebellion) and one main character drinks shots at a high school party.

One of the teens shows a (somewhat obscured) Playboy centerfold, plus a few jokes about virginity, and teen couples kissing passionately at a party.

One of the boys commits suicide off-screen via gun shot; parents are shown afterward hysterical as they hold him. One boy gets beaten up, his nose bloodied. One character says of his beau,"if I don't have Chris I'm going to kill myself." One student gets paddled by headmaster as punishment.

Kids call Welton school "Hell-ton" frequently. "S--t" is said about a half dozen times, plus a smattering of "damn," "Goddamnit," and "Jesus."

Lots of nuggets of wisdom mostly spoken by Professor Keating: Think for yourselves, savor words and language, "words and language can change the world," and you should constantly look at things in a different way.

Period smoking -- lots of it. Both pipes and cigarettes smoked by adults and snuck by teens. A high school party includes plenty of drinking -- Knox does whiskey shots with new acquaintances.