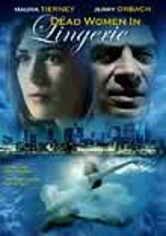 1991 R 1h 26m DVD
A psychopathic killer is preying on supermodels, and it's up to a hard-nosed detective to solve the case before more dead women in lingerie wind up in the morgue. This spoof of noir detective movies follows private eye Nick (John Romo), who teams up with a friend (Maura Tierney) of one of the murdered beauties to catch the killer -- all the while trying to avoid Nick's nagging mother. Jerry Orbach, June Lockhart and Lyle Waggoner co-star.