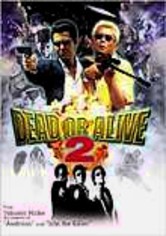 2000 NR 1h 37m DVD
In the second film in director Takashi Miike's Dead or Alive trilogy, Mizuki (Sho Aikawa), a Yakuza gangster, observes a shooting by an enemy assassin and tries to track down the murderer to size up the competition. To Mizuki's surprise, the man turns out to be an old childhood friend, and the two band together and try to return to their childhood home in an effort to escape gangsters who are out to get them.