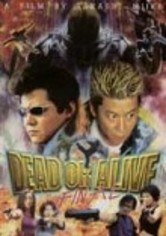 2002 UR 1h 28m DVD
Hoping to create an evil society of his own, a dictator named Woo (Richard Chen) drugs the entire population of his city with Prozac-infused hormone pills and ships the pregnant women and children off to prison. Woo's biggest follower is Honda (Riki Takeuchi), who fends off a growing underground resistance led by Fon (Terence Yin), his vicious girlfriend Jyun (Josie Ho) and a robot named Ryo (Sho Aikawa), who becomes Honda's greatest challenger.