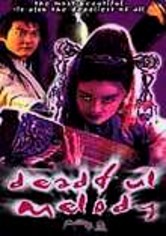 1993 NR 1h 32m DVD
The strains of a magic lyre are powerful enough to kill in this Hong Kong action flick. After years of training on the deadly instrument, Snow (Brigitte Lin) sets out to avenge the deaths of her parents, slain by a throng of martial arts masters seeking the lyre. But Snow's bloody assault on the villains gets sidetracked when she learns about long-lost brother Lui Lun (Yuen Biao) -- who, ironically, was adopted by one his parents' executioners.