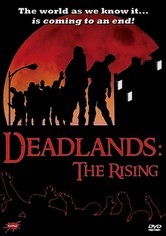 2006 NR 1h 38m DVD
Chaos reigns as major U.S. cities are hit by massive explosions, and an army of hungry zombies feeds upon disaster survivors in Gary Ugarek's horror film. Surrounded by the living dead, five strangers in Baltimore band together to defend their loved ones from the rampaging, flesh-eating ghouls. Extras include the featurette "I Am a Zombie Man," audio commentary and interviews. Dave Cooperman, Michelle Wright, Brian Wright and Connor Brandt star.