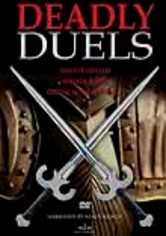 2004 NR 2h 30m DVD
Before the advent of weapons of mass destruction and the proliferation of handguns, there was a time when quarrels were settled in what was then seen as a gentlemanly fashion: by duels. This fascinating documentary looks at the now-extinct form of justice, which established itself during colonial times, made its way to the Wild West through cowboys and ranchers and became de rigueur in the South and elsewhere for decades.