Deal: Go Behind the Scenes of the Nation's Most Controversial Game Show: Let's Make a Deal 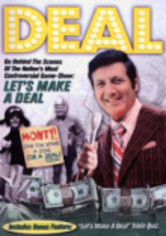 Deal: Go Behind the Scenes of the Nation's Most Controversial Game Show: Let's Make a Deal

1978 NR 1h 35m DVD
Known for its vividly costumed audience members, ridiculous booby prizes and charismatic host, Monty Hall, "Let's Make a Deal" was one of the most popular game shows of all time. But behind the screwball antics lurked a culture of corruption that was unmatched in the industry -- and nearly impossible to believe. This in-depth documentary explores the darker side of an iconic American program and sheds light on its well-kept secrets.