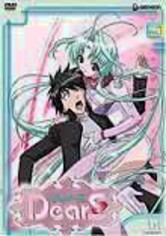 2005 NR 4 discs
It's been more than a year since a spaceship landed on Earth, and the beautiful alien "DearS" are still adjusting to civilian life. When one of them follows student Takeya-kun home and calls him "goshujinsama" (master), the teen is in for a change. Meanwhile, he'll have to continue dodging advances from his landlord's daughter, who's dead-set on invading his privacy. Iku Suzuki directs this television series based on the manga series.