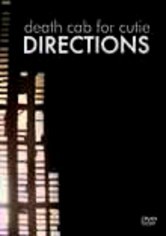 2006 NR 0h 55m DVD
After meeting dozens of fascinating people on the road, Death Cab for Cutie hatched their plan for this clever musical concept, composed of 12 short films inspired by songs on their album "Plans." Among the offerings is a video for "Marching Bands of Manhattan" directed by P.R. Brown, whose clients include Billy Corgan and Motley Crue, and "Soul Meets Body," directed by Cat Stolen, who collaborates frequently with Cake and Bright Eyes.