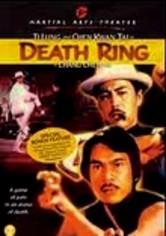 1983 NR 1h 30m DVD
A son must fight for his father's freedom in this thrilling martial arts actioner directed by Shaw Brothers legend Chang Cheh. After his dad is framed for murder, the son travels to Thailand to find him. There, he winds up fighting in a "Death Ring" championship, which features snake style and tiger claw kung fu matches. Shaw Brothers superstars including Ti Lung and Chen Kwan Tai appear in some high-octane fight sequences.