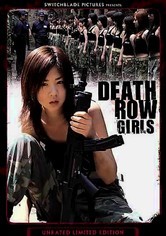 2004 UR 1h 23m DVD
Inmate 1316 is sent to the Island, Japan's toughest prison for the most notorious female prisoners, and realizes the place is even worse than its reputation -- nobody except the guards ever leaves alive. As she uncovers one terrible secret after another, including secret graveyards and unauthorized executions, she decides to fight back with every weapon she can find in this Japanese action thriller by Sadaaki Haginiwa.