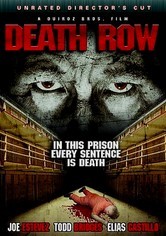 2006 NR 1h 25m DVD
Accompanied by four unlucky guards, eight convicts are sent to an abandoned prison to work off their sentences. When a vicious killer starts picking off the criminals and the guards one by one, it's up to the remaining convicts to learn the psycho's identity and end his bloody rampage. Cult faves Joe Estevez and Todd Bridges star in this criminally suspenseful thriller from the prolific filmmaking team of brothers Ed and Jose Quiroz.