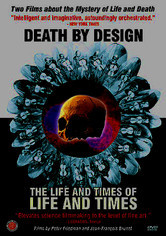 1995 NR 2h 10m DVD
Peter Friedman and Jean-Francois Brunet's unusual 1995 documentary, which has won accolades the world over at various film festivals, attempts to demystify cell structure. Aided by microcinematography, the movie gets under the skin, so to speak, of the body's building blocks and references classic movies and other postmodern influences to share the intricate details of a very scientific -- and fascinating -- tale.