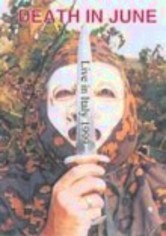 2005 NR 1h 0m DVD
Rock group Death in June is renowned for such earth-shattering tunes as "Torture by Roses," "To Drown a Rose" and "Coal Black Smith." This collection includes three of their music videos shot in Croatia and features the band's thrilling 1999 performance in Bologna, Italy. Cameras placed at various surprising angles capture the electricity and vibe of one amazing night, which has the group running through 20 of their signature goth-techno tunes.