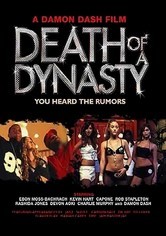 2003 R 1h 31m DVD
With carte blanche access to Damon Dash (Capone) and Jay-Z's (Robert Stapleton) hip-hop empire, white music-magazine reporter Dave Katz (Ebon Moss-Bachrach) tries to blend in with the hottest rappers, their blinged-out entourages and a harem of sexy video vixens in this mockumentary. Katz starts selling gossip to the tabloids and goes too far trying to get an exclusive scoop on a rift between Dash and rapper Jay-Z. Devon Aoki co-stars.