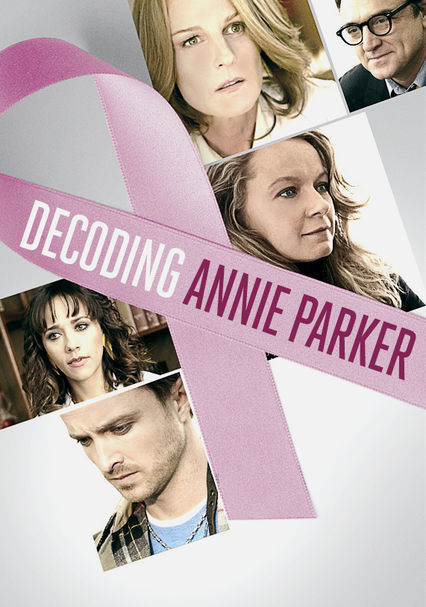 2013 R 1h 40m Blu-ray / DVD
In this fact-based drama about the origins of disease, breast-cancer patient Annie Parker works with tireless researcher Mary-Claire King as she tries to identify cancer's genetic components -- despite a lack of funding and skeptical colleagues.

Parents need to know that Decoding Annie Parker is a multi-decade docudrama about two women: the scientist who discovered the breast cancer gene and the cancer survivor who makes it her mission to figure out why her family was so afflicted by the disease. Sex and language are the big content issues here; there are several references to and brief glimpses of sex (bare backside, moaning, adultery) and occasional use of very strong language, which tends to be variations of "f--k" and "s--t." Several characters die, mostly of cancer (and in one case, AIDS). Audiences will learn about the scientific method that led to the discovery of the BRCA gene.

Several references to sex (or "thumpety, thump, thump," as the main character calls it); several brief scenes of a married couple having sex (bare backs, buttocks); and one brief scene of adulterous sex. A woman complains about how her husband won't touch her after her mastectomy.

There are several positive messages in the movie, including the idea that research -- and not just awareness -- is what's going to help prevent or stop cancer. Without Dr. King's commitment to research, who knows whether it would have been discovered that there's a genetic predisposition to certain kinds of breast cancer?

No overt product placements.