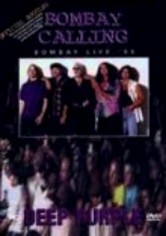 1995 NR 1h 54m DVD
Deep Purple heads to India for this 1995 concert recorded live in Bombay -- but there's also a bonus performance from a show recorded that same year in Seoul, South Korea. The set list features one of the band's biggest hits, "Smoke on the Water." Other tracks include "Purpendicular Waltz," "Space Truckin'," "Black Night," "Woman from Tokyo," "When a Blind Man Cries," "Perfect Strangers," "Child in Time," "Speed King" and "Highway Star."