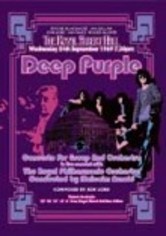 2003 NR 0h 52m DVD
In September 1969, keyboard player Jon Lord made musical history by bringing together two very different groups -- the 80-piece Royal Philharmonic Orchestra and his own band, Deep Purple -- for a special performance of a concerto he composed. This documentary captures that landmark show, which marked one of the first times a popular rock band performed a live set with a classical orchestra.