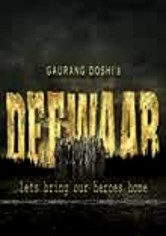 2004 NR 2h 43m DVD
A landmark film, and perhaps the first Hindi movie to deal with the great escape of Indian prisoners of war from Pakistani holding camps, Deewaar tells the story of a few prisoners of the 1971 conflict that were still held in custody by the Pakistani government. Divided into two parts, the movie focuses on a son's quest for his missing father and a desperate bid for freedom during a mass escape.