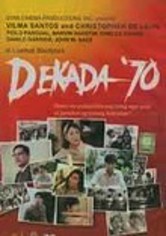 2002 NR 2h 15m DVD
Chito S. Rono directs the story of the middle-class Bartolome family and their matriarch, Amanda (Vilma Santos), as they become swept up in the Philippines's political turmoil of the 1970s. This potent drama follows the developing lives of each of Amanda's five sons and the varied paths they choose in response to political arrests, bombings and the establishment of martial law -- events that ultimately lead Amanda to make a stand of her own.