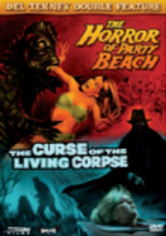 1963 NR 2h 42m DVD
Scarf down a double dose of director Del Tenney with this one-two punch of campy 1960s horror! In The Horror of Party Beach, a wayward stream of toxic waste brings to life abandoned human remains, which mutate into flesh-eating monsters. Then, in The Curse of the Living Corpse, a dead man's family is forced to honor his final wishes exactly as he expressed them in his will … because if they don't, his spirit will come back to haunt them.