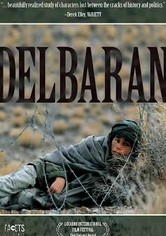 2001 NR 1h 36m DVD
Escaping the war in his native Afghanistan, young Kaim (Kaim Alizadeh) slips illegally into the Iranian border town of Delbaran, where he finds work in a small coffee shop and tries to forge a new life. Clinging to a precarious thread of hope in the midst of war and the opium trade, Kaim must also duck the Iranian police and contend with the specter of unemployment as the café faces hard times. Abolfazl Jalili directs this touching, funny drama.