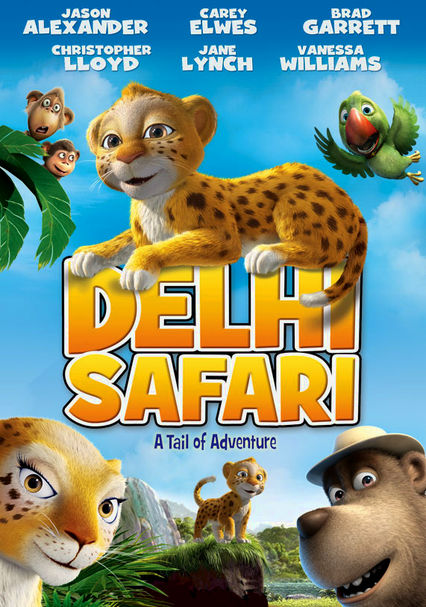 2012 PG 1h 36m DVD
Human encroachment is about to send the denizens of a wildlife reserve packing, until an anger-management-guru bear suggests diplomacy. But only one of the animals can break the language barrier: a human-loving, animal-hating parrot named Alex.

Parents need to know that Delhi Safari is an animated talking-animal adventure that includes a couple of frightening scenes and some innuendo. Most disturbing is an intense scene in which a father leopard is killed by a real estate development's construction crew; the scene is in slow motion and the mother and cub witness the death. Aasi monkey is a weapons-carrying warmonger who attempts to injure or kill a couple of different animals and wants to declare war on the humans. One scene shows a man putting his hand on his somewhat scantily clad date's legs and implying that he'll reward her for fooling around with him. Language includes insults like "dumb," "stupid," and some scatological jokes. Like most animal films, there's a strong message about caring for the environment and wildlife preservation.

There's a brief scene of a human man bringing home his date in what appears to be a "casting couch" situation. The producer puts his hand on his date's legs and says he's considering making her part bigger. She's wearing a midriff-baring top and a miniskirt. But just as they're about to kiss, an animal obscures the PDA. Alex says a female bird is "hot."

The leopard father is killed by a construction crew (he's shot and falls to his death). The intense death happens in slow motion, with the mom and cub watching. The monkey is basically a warmonger for the majority of the movie and has a lot of weapons. He even wears a warrior-style headband and attempts to injure or kill Alex the parrot.

Language includes "stupid," "coward," and "dumb," as well as some fart jokes and an exclamation of "good God!"

Delhi Safari encourages wildlife preservation and environmental awareness of animal habitats. Teamwork and friendship are also portrayed positively -- the group sticks together even through tough times.

Some mentions of companies and news organizations found in Delhi, India.

Jokes about how a coconut milk must've been old, because the monkey and parrot start slurring their words. Alex says he feels like his owner when he comes home late and starts tripping.