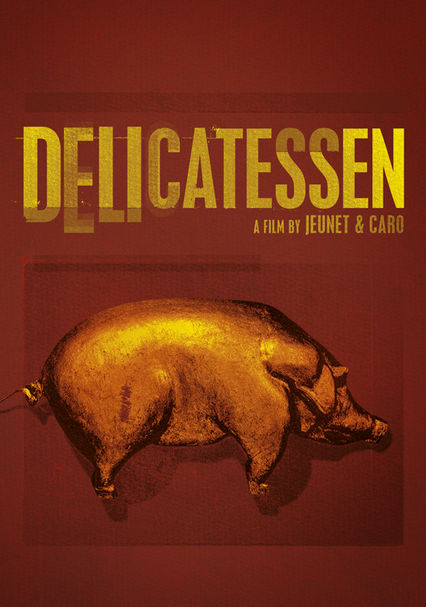 1992 R 1h 39m Blu-ray / DVD
Gentle clown Louison (Dominique Pinon) moves into a tenement with a deli on the ground floor and falls for the butcher's daughter, Julie (Marie-Laure Dougnac). But it's soon discovered that her father (Jean-Claude Dreyfus) is really butchering people (à la Sweeney Todd) and selling the meat to tenants. At a crossroads, Julie must decide whether to remain loyal to her father or expose him to save Louison from becoming the next entrée.

Parents need to know that this dark comedy-fantasy is not always easy to follow -- maybe a good thing, as it uses hints and innuendo rather than in-your-face gore to show a starving society where cannibalism reigns. Meat cleavers and knives are fondled menacingly, but onscreen violence is limited to one gunshot, hand-to-hand fighting, and a blade in a forehead, all pretty bloodless. One character is obsessed with committing suicide, and attempts (usually failing) in numerous comical ways. The villain's sexual intercourse is signified via montage of squeaky bedsprings and rhythmic chores. There are a few swear words (including the f-word). In bad-dream sequences viewers see a chimpanzee (not a very cute one, but a "pet" nonetheless) whom, we are told, was killed and eaten. A few characters (including children) smoke.

The butcher has an ongoing sexual relationship with a curvy tenant (occasionally she is seen in skimpy clothing/lingerie); we hear and see their rhythmically squeaky bedsprings in a sight-and-sound gag that is a metaphor for sex and orgasm.

One character fatally shot, another lethally impaled in the forehead. No bloody gore, but it is stated repeatedly that people are eating other people in this grim future world, and the butcher forebodingly fingers cleavers and knives. There is hand-to-hand scuffling and attempted strangulation. A suicide-prone character attempts to rig up nooses, guns, electrocution devices, and explosives (usually with no success).

"BS," the f-word, the s-word (which in French is actually an "m"-word, ask any French teacher).

Dark view of human nature and how far people will go to preserve accustomed lifestyles (meat consumption, commerce, etc.) even in end-of-the-world mode.

Cigarette smoking, including by a boy -- made to look fun when Louison blows smoke soap-bubbles.