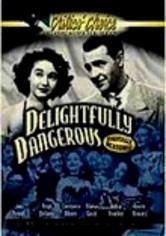 1945 NR 1h 32m DVD
Innocent young music student Sherry Williams (Jane Powell, in her second starring role) dreams of following in the footsteps of her older sister Josephine (Constance Moore), a big Broadway star. But when Sherry arrives in the Big Apple, she learns that her sis is actually a burlesque stripper. Sherry tries to make things right by setting up Josephine with a hotshot Broadway producer (Ralph Bellamy) in this frothy musical comedy.