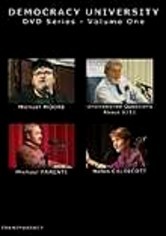 2004 NR 4 discs
At venues around the nation, this unique series features some of the more opinionated politically-minded commentators of the early 21st century. Academy Award-winning documentarian Michael Moore speaks about George Bush, Dick Cheney and the bin Laden connection; the National Press Club hosts a panel discussion; Michael Parenti speaks about terrorism and Helen Caldicott addresses the first anniversary of the 9/11/01 terrorist attacks.