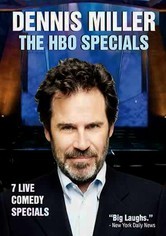 2009 NR 3 discs
Dennis Miller fans won't miss a rant with this comprehensive collection of seven of his HBO comedy specials that spans a few of his "Saturday Night Live" years all the way through to 2006. Trace Miller's controversial journey from left to right as he roasts Ronald Reagan in 1988's Mr. Miller Goes to Washington, then takes on global warming, terrorism and the Clintons in 2006's All In. For this Emmy winner, anyone -- and anything -- is fair game.